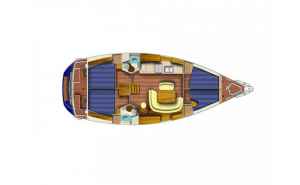 The charter company arranged their own taxi van to pick us up, informing us that the airport taxis could only take 3, so it was more economical to use their service.. They were there to greet us and the Taxi was on time both from the airport and back to the airport.
Provisions were arranged through the charter company , and while the form wasn't the easiest in the world they did turn up somewhat late we asked for 4 and they were there for 56.00 . Quality good but one bag of provision was missing which we didn't realise till later.
Handover was efficient and professional and they did supply some proper sized mugs for tea upon request.
The yacht was well equipped. nicely updated with newer sails and electric loos from its original 2007. Batteries updated to cope with the extra power with solar panels to help.

It would have been nice if the GPS had been with a bigger screen but otherwise it worked well.

Lavrio is a good functioning port. But no separate showers are offered. But it gives very good access to the Cyclades and probably saves at least 2 half days from the marinas near Piraeus.
We sailed for lunch off Zea.
And to the port of Merikhas on Kithnos.. Harbour master, there to help us with our Stern to mooring. nice place to visit and decent choice of restaurants.
Good sails South at 6/7 knots to a bay on the south of Serifos and then we visited Vinikas on Syros .nice bay and Swimming. Similarly we had a nice beam reach across to loutra on the Eastside of kithnos. We finished with Voukari on Zea . Nice port and good Bay for swimming.
Negotiated a mid Saturday return as we had a late flight instead of Friday evening which enabled us to spend a final day in Sounion. Visited Poseidon's temple on Saturday morning before returning to base.