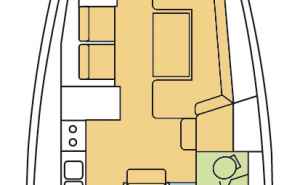 Relaxed sailing with off the beaten path options

The condition of the yacht was generally good, minor deficiencies were the state of the sheets and the sails, which were about to need an overhaul. The time of the year was well suited for sailing, despite the higher chance for rainfall. The thing to watch out for are the squalls moving in, one can never tell how strong it is going to blow, hence, best to reef in early. On the last day the top of the mainsail blew out in a heavy squall while we were putting in the second reef; but no worries, the charter company was relaxed about it.
Bora Bora was the least interesting of destinations; at least for us seeking less developed destinations. Maupiti and Huahine were our personal highlights! Really liked the passes and ocean passages.
Doing the eastern part of Bora Bora cannot be really recommended for monohulls; it is all the way shallow and too stressful for the skipper and crew for what it is worth.